Considered Bermuda’s national dish, this spicy, tomato-based soup is believed to have been developed by British colonizers of the island (officially a British territory in the north Atlantic) in the 17th century.  Sherry pepper sauce, preferably Outerbridges, and black rum, Gosling’s Black Seal preferred, are the expected accompaniments. 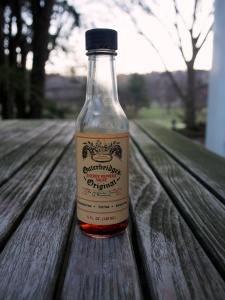 NOTE: If you can’t find Outerbridge’s Original Sherry Pepper Sauce, here is a recipe from the 11th edition of Bermudian Cookery, a collection of recipes from members of the Bermuda Junior Service League. “This should be made well ahead so that it may sit for several weeks in order to obtain that zing all Bermudians love. It is very simple – just fill a jar or decanter half full with red bird peppers and fill up with sherry. Keep adding sherry as needed. Add several drops to fish chowder”.